Since 2016, the tour de CLARIN initiative has been periodically highlighting prominent user involvement activities in the CLARIN network in order to increase the visibility of its members, reveal the richness of the CLARIN landscape, and display the full range of activities that show what CLARIN has to offer to researchers, teachers, students, professionals and the general public interested in using and processing language data in various forms. In 2019, we expanded the initiative to also feature the work of CLARIN Knowledge Centres, which offer knowledge and expertise in specific areas provide to researchers, educators and developers alike. Initially conceived as a series of blog posts published on the CLARIN website, Tour de CLARIN soon proved to be one of our flagship outreach initiatives, which has been released in the form of two printed volumes.

Submitted by Jakob Lenardič on 28 October 2020

The Spanish CLARIN K-Centre was the first CLARIN K-Centre to be established. In 2015, CLARIN granted the K-Centre recognition to three research groups that decided to work together as a distributed centre with the aim of supporting research in all the languages of Spain. Initially the Spanish K-Centre covered Spanish, Basque and Catalan, but soon after a Galician specialist research group joined the centre.

Thus, the Spanish CLARIN K-Centre brings together the specialities of the following four nodes or groups with complementary skills and experience:

The Spanish CLARIN K-centre supports an average of five requests per year from postdoctoral researchers and senior researchers in a variety of topics, such as poetry analysis, identification of linguistic features for detecting fraud, analysis of bilingual child corpora, and representing discourse relations in political debates. In addition to creating user-friendly tools like ANALHITZA and DContado, the K-Centre has also participated in several summer schools and the development of teaching materials for promoting the benefits of the CLARIN infrastructure.

The Spanish CLARIN K-Centre has supported the creation of a strategic research network, INTELE, in order to promote the participation of Spain in CLARIN ERIC as well as other European infrastructures like DARIAH. The INTELE network aims to reduce the digital divide in Spain by promoting new lines of multidisciplinary research in the Humanities and Social Sciences and by participating in their digital transformation with the help of language technologies. The seven research groups and universities involved in INTELE are the following:

The specific objectives of the INTELE network are to coordinate and organize the activities of the seven research groups in order to support and foster the interest and use of the CLARIN and DARIAH infrastructures for Digital Humanities and Social Sciences, encourage meetings between researchers working in Digital Humanities and Social Sciences, and create a catalogue of tools and use cases made by researchers working with Spanish and the co-official languages Basque, Catalan-Valencian and Galician. INTELE also aims to promote the collaboration and the internationalization of the seven Spanish research groups, so that Spain can become a member of the European infrastructures CLARIN and DARIAH. 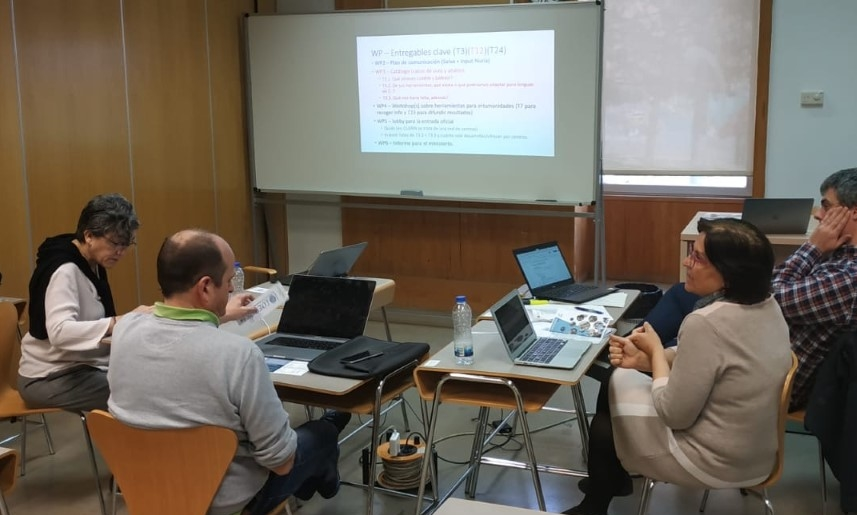 The kick-off meeting of INTELE.